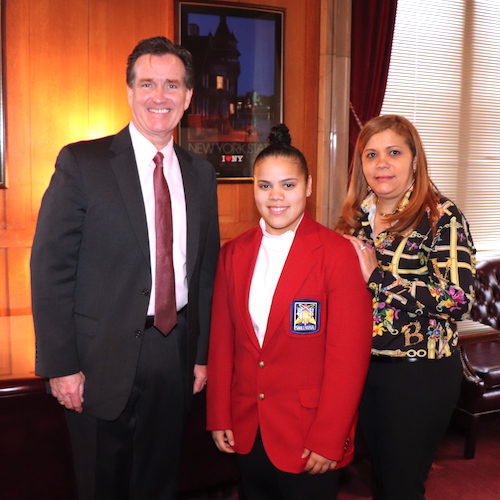 Very often, the best way to demonstrate the tremendous impact BOCES makes is to let our students tell their own stories.

Two of them, a current SWBOCES student and a graduate of two of our programs, did just that in the halls of the state Capitol and legislative offices this week. Leslie Patino and Ian Gray joined board members, administrators, and teachers on BOCES Advocacy Day, Feb. 26. The annual day of meetings with lawmakers and legislative aides is an opportunity to remind them of the important work BOCES do as the process of developing state budget priorities gains momentum. Advocacy Day is a collaborative effort between the state's 37 BOCES and New York State United Teachers.

Leslie is a Career and Technical Education student from Sleepy Hollow who is enrolled in SWBOCES Security, Law and Policing program. A member of the Greenburgh Police Department's Explorer's program, she has long dreamt of becoming a police officer and credits SWBOCES with helping make that dream a reality. Elected officials like state Sen. John J. Flanagan of Long Island and state Sen. David Carlucci of Rockland County were impressed by her ambition. Leslie was joined by her mother, Rosa Patino.

Ian encountered BOCES twice, first as a student in an alternately assessed program in Harrison during his grade-school years, and later, when mistakes in his life put him in the Westchester County Department of Correction. Luckily, he says, SWBOCES operated the Incarcerated Youth Program, providing schooling to high school-age students there. He credits the persistence of counselor Kevin McAllister for turning his life around at that point. Mr. McAllister recruited Ian for the Advocacy Day trip and was at his side as he told his story throughout the day. 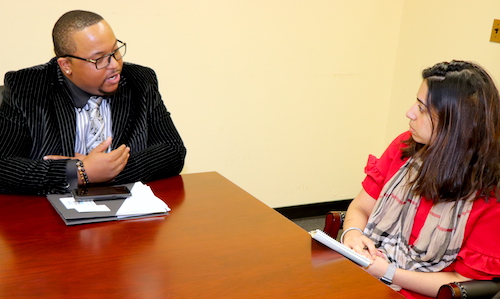 Advocacy Day is about education and information, from the BOCES perspective, ensuring legislators bring to the budget process awareness and understanding of the work BOCES do for students and schools across New York State. Among the key issues discussed were:

Scroll down to read more about Ian and Leslie and how SWBOCES has made an impact upon them and their lives. 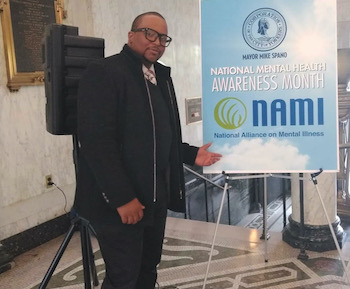 Ian Gray is on a mission to share his life experience, to connect with others who’ve gone through what he’s gone through, and to help them the way others once helped him.

What he has gone through can accurately be summed up as trauma—the trauma of abuse, drugs and the lack of a stable, supporting family structure. But he’s not about blame. Far from it. Responsibility and accountability are his bywords.

Where did someone who grew up in group homes and hospitals across Westchester learn that?

"BOCES was a checkpoint for me in my life,” says Mr. Gray, now 29 and a peer specialist with the Mental Health Association of Westchester.

The difference BOCES made for him is the crux of the message he hopes to share with state legislators on BOCES Advocacy Day Feb. 26 in Albany.

Mr. Gray first encountered SWBOCES through one of its special education programs as a youth. Later on, when his life was off track and he found himself at the Westchester County Department of Correction around 2008, there was SWBOCES again.

The Incarcerated Youth Program SWBOCES operates at the county jail was like an escape, an exclusive club he now ways he was privileged to join. There he met counselor Kevin McAllister, who showed such genuine concern for him and who he credits with giving him the tools to put his life back on track.

“The empathy, the sympathy, the authentic caring,” said Mr. Gray. “No sugar coating, just genuinely caring about the next human being really helped me.”

He was hard-headed when he arrived there, he admits now. But the love he was shown enabled him “to recharge my battery” and set a path for his future.

“I didn’t get it right then and there, but I did get it,” he says. “That was my starting point.”

Jail saved his life, he says. It was no place anyone would want to be, but it shook him back to reality. He knew he'd end up back here if he kept living his life the same way. The creed he was taught as a member of the youth program still resonates with him.

So does a certain project assigned by Mr. McAllister: Write your own mission statement.

“The simplicity of him explaining that this is temporary. This is stationary, being in jail,” he recalled. “But when you get out, the big question is what are you going to do?”

Telling his story isn’t easy, but it’s the challenge he has taken on. He talks at high schools, hospitals, the police academy, even private businesses. Now 29, he hopes to develop an outreach platform specifically targeting victims of trauma and abuse and those with mental health issues.

He wants to help others shine their light the way he says the teachers and counselors at SWBOCES helped him. Their authenticity and credibility made an impact, and he wants to pay that forward.

It comes down to blame versus responsibility, Mr. Gray says. 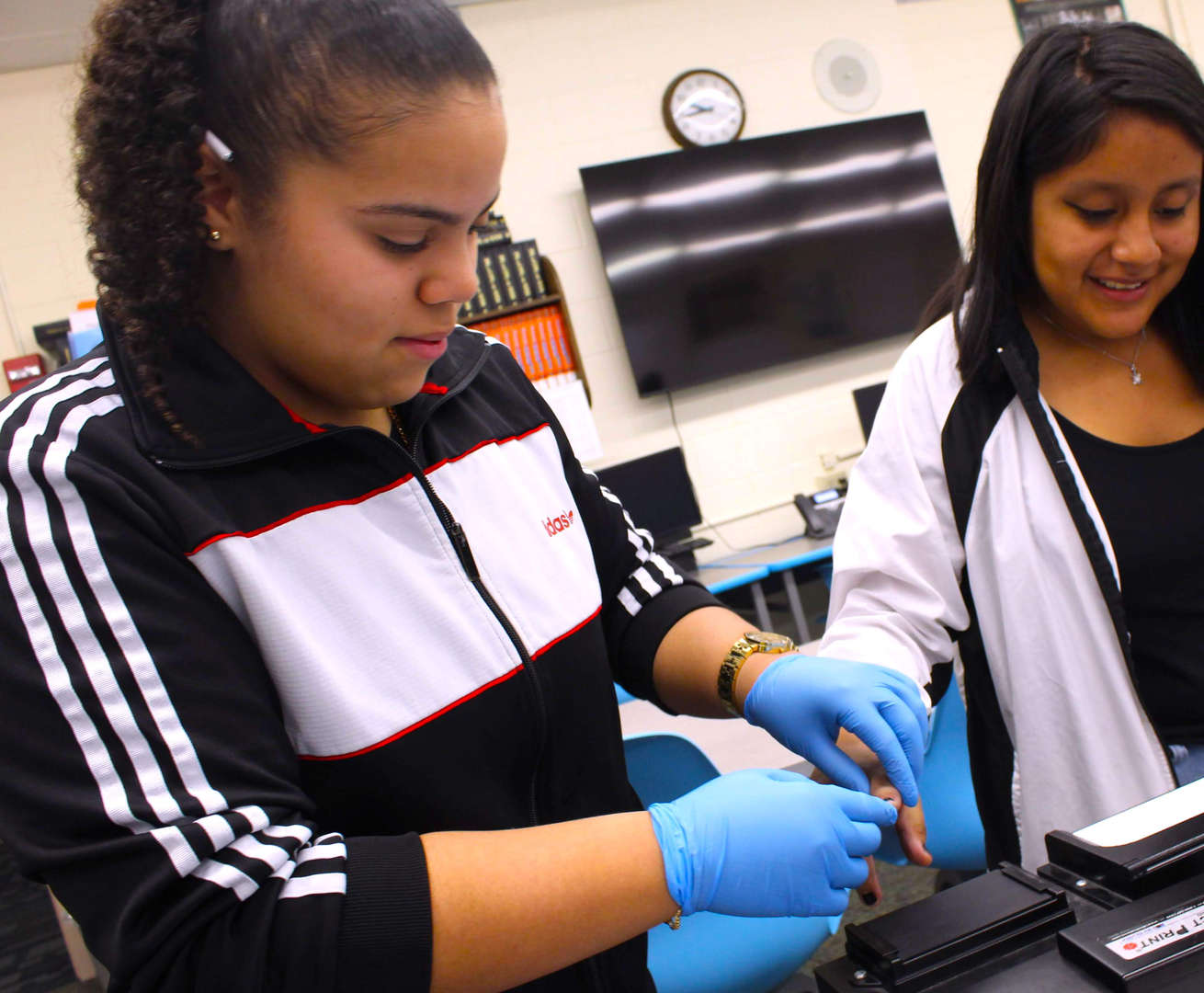 As a little girl, Leslie Patino attended a Halloween parade with her mother. She was dressed up in one of her favorite costumes — that of a police officer. During the event, an actual police officer noticed her. He handed her a plastic police badge, looked her in the eye and told her he knew one day she would be a police officer too.

“Being a cop is one of my dreams,” Leslie, a junior at Sleepy Hollow High School, said while recounting that story. “When I heard about the Security, Law and Policing program at the Southern Westchester BOCES Center for Career Services, I automatically said I was going. I didn’t have to think about it.”

Her enthusiasm for the program and her success there are big reasons why she was asked to join SWBOCES officials on their annual Advocacy Day trip to Albany on Feb. 26. She’ll represent the Career and Technical Education program and share her story with state legislators and how SWBOCES has made a positive difference in her life.

Leslie said the field of law enforcement appeals to her sense of adventure and the thrill one gets from being in challenging situations.

Since the start of the school year she has been learning many of the skills she will one day need, including how to handcuff suspects, fingerprint an individual and conduct searches.

Leslie is a member of the Greenburgh Police Department Explorers Post. She said she learns many things in her BOCES class that are later taught in the Explorer program.

“I learn it at BOCES, and I know what to expect when I go to the academy,” she said.

Learning skills that will benefit her work in the future was one of many things that inspired her to attend BOCES, along with the hands-on approach used in the classroom. In addition to the focus on law enforcement that she enjoys so much, Leslie said an added benefit of attending BOCES was the opportunity to meet new people.

“You are meeting people from a whole bunch of schools in the districts. It gives you a feeling of opening up to other people more because you are in a classroom where no one knows anyone, then you become friends,” she said. “I have a lot of friends from BOCES now. It’s not just for the class or program, you are also meeting a whole new group of people and working with them, hands on.”

Leslie and her fellow Sleepy Hollow BOCES students meet before school begins to catch a bus to the Valhalla campus. They spend two-and-a-half hours in their respective programs, before being bused back to their home school for their regular classes.

When she goes back to Sleepy Hollow, she says, she misses the BOCES campus and the work she does there. She also misses her teacher, Ray Sulla.

“He’s the best,” she said. “I don’t know what it is, but ever since the first day, I’ve had a good feeling about him. He knows what’s what, and he makes sure everybody is on track.”

Leslie is still considering her options for the future before she becomes a police officer. She is trying to decide between earning her Associate’s degree or joining the Air Force for two years.

Wherever her path takes her, she'll remember that it started with a dream and first became a reality at SWBOCES.