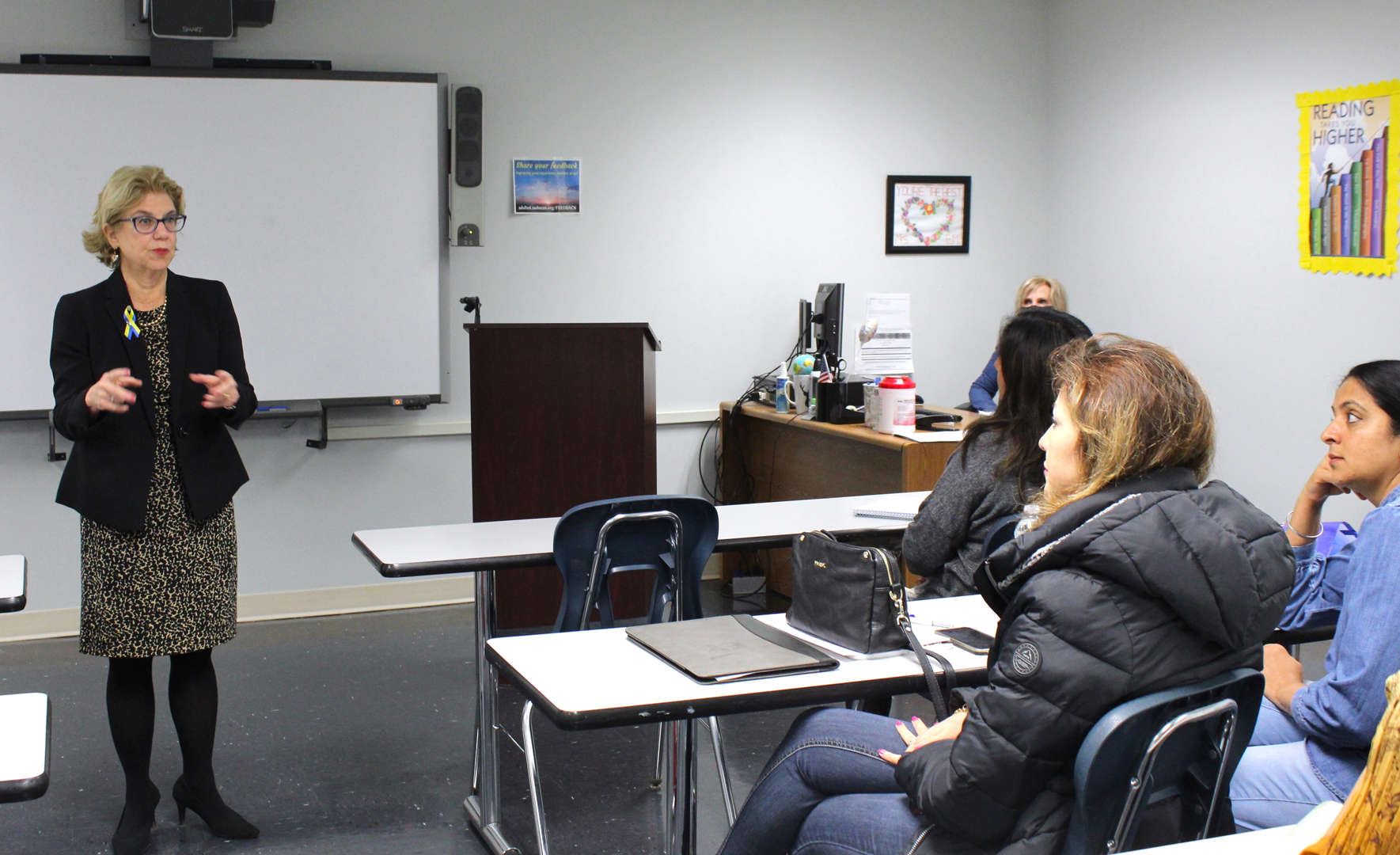 Students in Sheryl Lerner’s GED/HSE Preparation class learned recently that they have an advocate in state government whose role is critical but may be unfamiliar to some.

Sen. Mayer was invited to discuss with students how the state government functions, her role and differences from the federal government.

“I am a big education person,” the senator told students. “What I try to do is fight for every school,” including BOCES.

Senator Mayer explained how she represents about 300,000 residents from Yonkers to Bedford and works in Albany for her constituents three days a week between January and June.

“I am only involved in New York State,” she told students, differentiating her role from that of a U.S. senator. “There is a range of things we do at the state level.”

Ms. Lerner said her purpose in inviting the Senator to her class was to further inform her students and give them concrete meaning as to the role of state government in her students’ lives.

Students need to know about American government, Ms. Lerner said, specifically the respective roles of the state and federal governments.

When she asked her students to look up who their representatives were, she said they focused on members of Congress and were surprised to discover that the state has its own representatives too.

“It’s important for them to know what she does, how the state funds education and what her job is,” Ms. Lerner said of Sen. Mayer.

With the senator’s office nearby in Port Chester, she realized Sen. Mayer could be instrumental in developing her students’ understanding.

Ms. Lerner’s students were impressed to know that Sen. Mayer, in her role as the Chair of the State Senate Education Committee, has expressed her dedication to help fund both childhood and adult education in New York.

A key lesson these students, her constituents, learned was that they can contact the Senator with their concerns and that education is a state’s responsibility to its citizens via their representatives. They also learned that a state senator is also responsible for working with local and county officials since their needs often intersect with those of the state.

The goal of her and her colleagues, the senator said, was to try to reach a consensus as to the best way to provide necessary funding and services to her district.

“I represent a district that is quite diverse,” Sen. Mayer said. “There are a lot of different voices. Once elected, you have to talk with everyone whether they agree or disagree. Your job is to serve the people.”

She also explained to students that they are represented by a member of the state Assembly, in this case Assemblyman Steven Otis.

“No one expects you to know who they are,” Sen. Mayer told students, who live throughout the county. “But what you should know is that you can call us about any issue. We are helping people every day. It’s what we do.”

“It’s our job,” she continued. “You give us the suggestions; we find the solutions. It’s fun when you are able to solve problems.”

Sen. Mayer acknowledged that as an advocate and representative of her district, she desired to address the growing need for adult education. It is one area where she said she feels the state could do more.

“We spend a huge amount on K-12, but on adults we don’t do enough,” she said. “We have to fight every year to put money in the budget, so adult education goes beyond grade 12.”

Sen. Mayer added that she was impressed by their commitment and dedication.

“I credit you with being here because it takes initiative,” she said.